This story was originally published on Global Voices and written with Tanya Lokot. 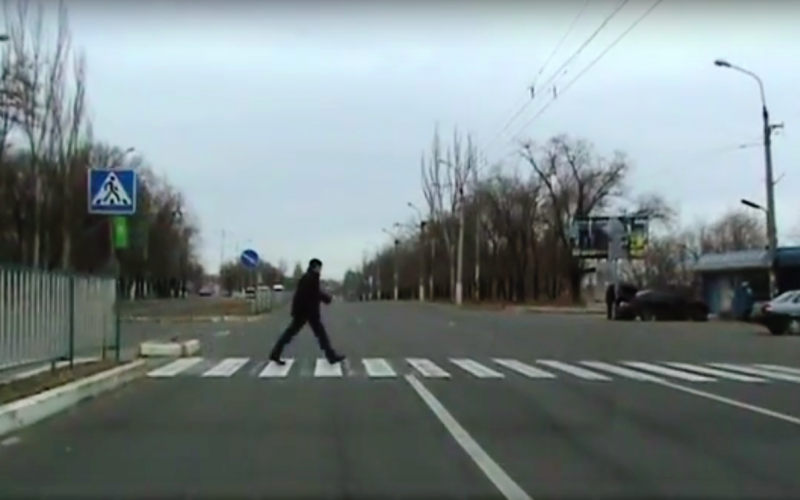 “The Luhansk videos focus on the mundane. And that. . . is the point.” Screenshot from a dashcam video posted on YouTube.

A car revs and pulls forward. Volume cranked on the radio, out blares a Russian pop song from the 1990s, all static and drum machine. Streets, pavement, peripheral view of buildings, trees, kiosks, streetlights, pedestrians. Occasionally the driver remarks on something unseen in the landscape. It is a woman. It is a man. It is late spring and the poplars are shedding their white tufted seeds. It is winter and heavy wet flakes land on the windshield. The road is white. The route is through intersections, around corners, past monuments, gas stations, schools, apartment buildings, parks. It had no obvious beginning; it seems as if it could continue forever.

These are the excursions of Luhansk. They are videos shot with dashcams, and given to us by residents who know that we must want to see them. And who are we? We are the former residents of Luhansk, or perhaps of the Donbas, in eastern Ukraine, of other Ukrainian regions, or of some other place in the Soviet Union. We once had a car like this, listened to these upbeat electronic tunes, drove aimlessly on these streets, drank vodka or beer on these benches and Nescafé by these kiosks.

These images of Luhansk began appearing online in 2009, maybe earlier. They have titles like  “Luhansk Today”, with a date. Sometimes there’s a part 1, part 2, part 3. Or “Luhansk and Streets”, “Nostalgia for Luhansk”, “Winter in Luhansk”, or Luhansk plus the name of a street or neighborhood—Sovetskaya, Oboronnaya, Vatutin, Frunze. All names left over from Soviet times. For while other Ukrainian cities have renamed their streets with Ukrainian themes and heroes, Luhansk has kept Soviet names for many of its main thoroughfares.

The Luhansk excursions are part of a larger tradition of driving in the post-Soviet world. Dashboard cameras—dashcams—are ubiquitous, in part because of a love for gadgets, in part for protection. Drivers document their passage through the world, knowing that in case of an accident or attempted police bribery, the footage could prove invaluable later, as evidence or influence.

In dashcam videos, as in life, usually nothing happens. The famous ones record those moments when, by chance or circumstance, they capture an event worth noting: the passage of a bear, a trailer truck overturning, a jet fighter buzzing the highway, a tank bursting out of the trees, a meteorite trailing across the sky. 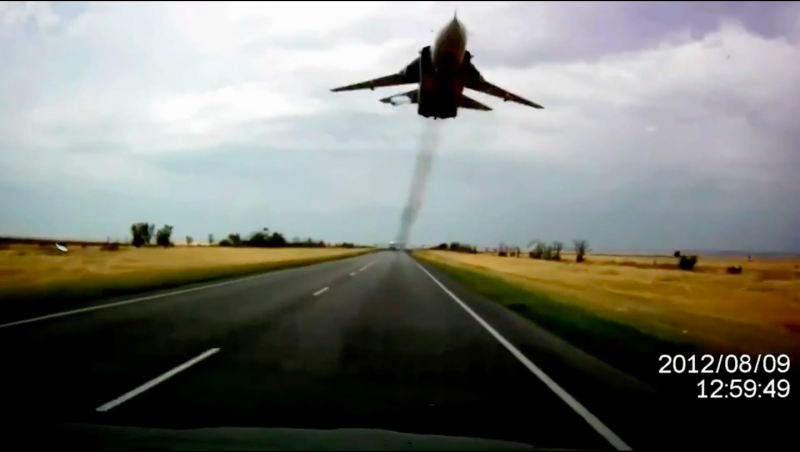 The Luhansk videos, however, focus on the mundane. And that—unlike the eventful dashcam videos of YouTube fame—is the point. Dashcams are there because you never know what might happen as you drive. But in the case of Luhansk, we know that exactly nothing will happen, and what we will see is precisely and only the same old streets and buildings. This is especially true of videos made after March 2014, when the Donbas, and Luhansk within it, became a contested, violent, and then militarized area, and when many residents decided it was no longer safe to stay.

The dashcam video genre takes on a special significance for those who have left eastern Ukraine behind, but want to know it is still there. The form remains the same, but the intent and meaning behind it are changing. People are now creating on-demand dashcam excursions around Luhansk, offering a glimpse of home to those who cannot return.

In November 2014, a Luhansk resident named Vitaly posted a call on his Facebook page, asking people to suggest streets, addresses and routes in the city which he then compiled into a single long route. With his dashcam on, he drove slowly along the route for over an hour, capturing familiar landmarks, but also turning corners to reveal broken windows and bus stops bent out of shape by the shelling.

To the chance observer, this might seem like an exercise in ruin porn, looking at the destruction for the sake of looking. But it is quite the opposite. While nostalgia for the familiar, decaying city is there, what really powers these videos is the hope that the city, as we knew it, still remains. We want to see the destruction, both the long-term damage we are used to and the newer marks and holes that shock us. But more than that, we want to reassure ourselves that something remains. We revel in the unremarkable sight of that Khrushchev-era apartment building as we see it come up in the video because it is home. And because it is still standing. 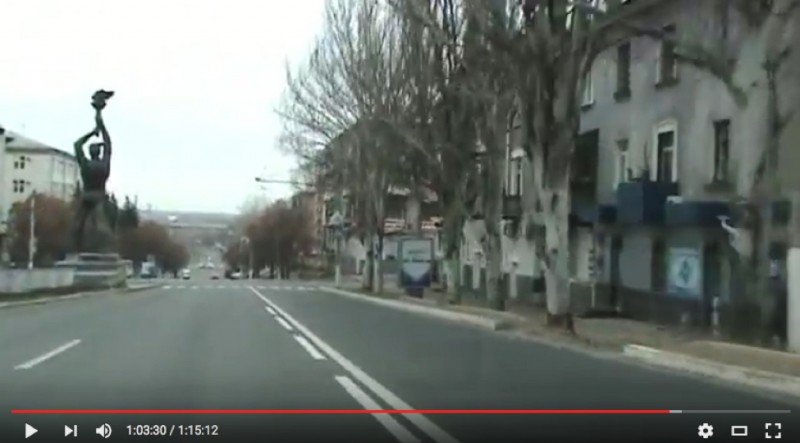 “What really powers these videos is the hope that the city, as we knew it, still remains.” Screen shot of November 2014 dashcam video of Luhansk posted on YouTube.

Many of us walked away from Luhansk. United Nations and Ukrainian authorities estimate over 1.5 million people from the Donbas have relocated to other parts of Ukraine or to Russia and other countries. We left behind our apartments, our childhoods, our parents, our collections of photos. Those who moved to escape the violence lost their homes and their everyday lives with all their habits and haunts, and an often lackluster but familiar routine. Those of us who had moved away earlier, for school or work, to Kyiv or other places, lost something else: a sense of Luhansk as it was fixed in our memories, a place to which we knew we could return, even if we rarely did.

The Luhansk excursions are designed explicitly for those of us who have left. They contain all the markers of authenticity necessary to evoke our nostalgia: The use of radio as soundtrack. The stated claim of no editing or censorship. The prosaic quality of the images, and the relatively narrow field of vision that shows us little beyond the surface of the road and other cars. The buildings and people remain on the periphery of vision.

The artlessness of the footage contributes to the claim of authenticity, and the idea of authenticity is crucial to understanding the images. They show both the mundane and the extraordinary, the actuality of the place, which is the root of nostalgia. They also show the changes caused by war, a newly realized cityscape of Luhansk that becomes a claim to a newly realized authenticity. 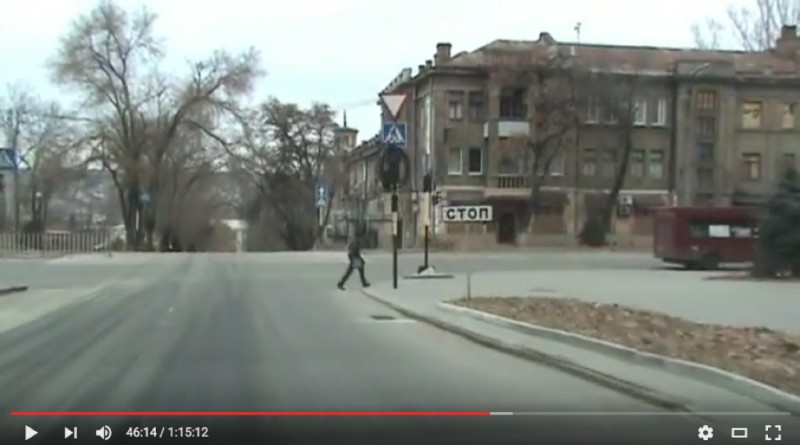 “We know that exactly nothing will happen, and what we will see is precisely and only the same old streets and buildings”. Screen shot of November 2014 dashcam video posted on YouTube.

Those of us who have lived in the former Soviet world will recognize these buildings, kiosks, parks, streetlights, the shape of curbs, the angle of billboards, as these designs are repeated throughout the post-Soviet space. But only people who have lived in Luhansk will recognize these specific streets, trees, neon lights, and graffiti on shutters, as well as the new spaces in the city’s streetscapes, created by the recent violence and destruction. In this way the particular loss of Luhansk blends with the larger, more generalized loss of the Soviet world, and partakes of a larger practice of street cruising and documenting with dashcams. These activities say first, “I am here” and “I endure” and only secondarily—with an undercurrent of pride, maybe concern, maybe resentment—“I miss you”.

The voice on the radio sings, “Summer will be over soon, there are no more hopes left.” And yet, by showing us the routine and the familiar, the pockmarked streets and shabby houses, the camera doesn’t surprise us, but comforts us, as if saying, “this is still here. You’re still here. You go on.”

The DJ on the radio puts on Johnny Cash: “Everyone I know goes away in the end.” But the streets and buildings keep rolling by. The city goes on, stubbornly but quietly. Now you see signs of fresh violence, and now you don’t. Was that window always broken or is it new? A journalist friend from Luhansk, upon watching the dashcam video, wrote:

“I wonder, if I fell into a coma a year ago and then woke back up today—would I be able to tell, just from what I saw through the car’s windshield, what had happened to Luhansk in the meantime? Or would I not notice any changes?”

These are fresh scars upon old scars, new decay upon old, and we are comforted to see that, despite both, the city that is home remains. We love it not because of or despite these scars. We love it because it made us who we are, and because these streets and houses contain the secrets of our childhood, the dreams of our adolescence, and the hopes of who we could become. You might see a boring dashcam video where nothing happens. We see ourselves, and we miss our city.

In the video, the Russian singer Delfin haunts the car radio and promises: “We will definitely meet again, do you hear me? I’m sorry.”

Tanya Lokot grew up in Luhansk; Ivan Sigal has never been to the Donbas, but lived in countries of the former Soviet Union for eight years.